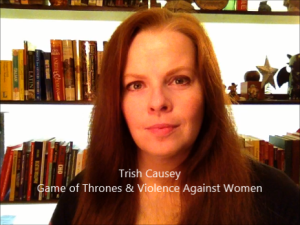 The last two minutes of Sunday’s “Game of Thrones” finale sent the internet into a frenzy as Jon Snow succumbed to an “Et tu, Brute`” ending. And yet, no one is talking about the beatings of the women in the finale, Cersei’s solo walk of shame, or the systematic abuse and rape of women throughout the show’s seasons. I address this in my latest YouTube video: youtu.be/YEx8CBo_ziY or watch it below.

When people speak of “Game of Thrones”, they marvel at the costumes, the production values, the pseudo-medieval landscape of knights, swords, and dragons. In fact, before I had ever seen GOT, I asked about it on Facebook, and the comments were all enthusiastic, with one in particular exclaiming, “You’ll love the costumes and the look of it. And the sex is GREAT!” The sex, of course, was mostly incestuous.

Fast forward past the hideous reign of the sadistic Joffrey, abuse of women is so commonplace in the show as to have lost any impact at all — in much the same way rape and domestic violence are pervasive in American culture but considered a “women’s issue”, leaving women the task and responsibility of not getting raped or beaten.

“Game of Thrones” gets its social commentary right sometimes. The storylines of religious fanaticism rising up and taking over the government to create a fascist state of oppression is a direct mirror of the Tea Party in America. The targeting and persecution of homosexuals was a realistic plotline with which many in the LGBT community can identify. But where is the episode in which all the women band together and address the battery and assault of women?

The subjugation of women in media reflects the fight women are still waging in society-at-large to live in a world that recognizes women are human beings. At the time of this writing, the Equal Rights Amendment is still in limbo. American women are not equally protected under the Constitution.

In the United States, women make up 51% of the population, 51% of small business owners, 52% of voters, 52% of the professional-level work force, and 60% of college graduates; plus, we control 80% of consumer spending. Why aren’t 51% of the television shows and films centered on women and women’s issues? Why aren’t 52% of the writers, directors, and creative artists women? Why aren’t 60% of corporate CEO’s female? Why don’t 80% of advertisements portray women as complete, healthy, fulfilled human beings instead of reducing us to the industry-standard Photoshopped, hypersexualized marketing prop?

Only 20% of the United States Congressional body is comprised of women — even Afghanistan has women in 27% of seats in its Parliament, according to the Quota Project. The Inter-Parliamentary Union ranks the United States 72nd in the world for women in national parliaments. And why hasn’t the United States had a female president yet? The United States ranks 78th in the world for having women in top positions of executive power. China, India, the Philippines, Latvia, Georgia, Ireland, Rwanda, Cuba, Indonesia, South Korea, Chile, Argentina, Croatia, Kosovo, Serbia, the Bahamas, Haiti, Sri Lanka, Ecuador, Nicaragua, Brazil, and the Central African Republic are just some of the countries that have had a woman as a president and/or head of state.

What could possibly be holding the United States back from women’s advancement in government, business, education, and society, in general? If you guessed “patriarchy”, you are correct. The foundation of all modern civilizations is patriarchy, an institutionalized form of culture that feeds off of misogyny, intolerance, and violence and specializes in the oppression of women through sexualized violence and domestic abuse.

Cultural phenomena such as “Game of Thrones” that harken back to a dark age of brutality and violence against women reveal our culture’s deep-rooted misogyny and help keep the cultural mentality stuck in a bleak, abusive purview that ultimately harms everyone, not just women. This mentality is reflected on college campuses that require incoming female students to attend a “how not to get raped” orientation rather than teaching the incoming males not to attack female students. Over 80% of reported rapes are committed by someone the woman knows, which insinuates that some men still think they have an unwritten entitlement to sex, willing or not.

How do we fix this everyday sexism in culture and media?

Hire more women writers to create new works. This will give an authentic voice to storylines about women so that the portrayal of women is not limited to male writers’ secondary filter of how men think women are or how women should be. The Broadway League’s 2002 poll of professional theatres and venues revealed that only 20% of theatre professionals, such as creatives and designers, are women.

Hire more women directors. Women have our own aesthetic, our own rhythms, and our own ideas about how relationships — romantic or not, can be portrayed. A simple theatre exercise will prove that the same script can look and sound completely differently when directed by a woman than by a man. Difference is okay. The world will not fall off its axis because conflict was resolved without the quasi-obligatory male machismo or violence.

Put a woman at the center of the story and the action in new works. Write her to be a leader who does not spend half of her time talking about a man — or obsessing over a romantic relationship — and who does not have to endure a plotpoint of being raped — as if women can only gain personal, internal strength by being raped.

#WhereAreTheWomen was a powerful rallying cry for feminists during the 2012 election year, and it is absolutely valid in most professions. Women make up only 4.8% of Fortune 500’s list of female CEO’s, while Rutgers University’s studies on the gender gap in college settings show only 24% of full-time professors are women. The numbers are even worse in the professional, commercial arts that create the entertainment media that pervade our culture, such as “Game of Thrones”.

The 2015 Academy Awards had eight films nominated for Best Picture. Not one film had a woman as the main character. Of the five directors up for Best Director and of the 10 films nominated in the Writing categories, not one nominee was a woman. For the 2015 Tony Awards, not one of the nominees in the categories of Best Director of a Musical, Best Choreography, Best Orchestrations, or Best Scenic Design of a Musical was a woman. But history (and herstory) was made when Jeanine Tesori and Lisa Kron became the first female writing team to win composer/writer Tony Awards for a show. It only took 69 years for that to happen.

According to the World Economic Forum, the United States ranks #20 in the world for economic gender equality, behind Nicaragua, Rwanda, and South Africa. The United Nations has reported that 70% of women experience a sexual attack at some point in their lives. The U.N. also works for gender equality through its Development Programme to help women around the world: 60% to 70% of the world’s poor are women, over 65% of women are illiterate, and over 30% of women are subjected to some form of violence during their lifetimes.

Men cannot tell our stories for us. Only women can tell women’s stories fully and authentically.

This is not a coincidence. This is a systematic silencing of women across society. This is why popular shows such as “Game of Thrones” are able to thrive with little opposition or outrage toward the portrayal of violence against women. After all, why complain about the way women are mistreated when the sword fights and costumes are so cool?

Wake up. Speak up. Be heard. 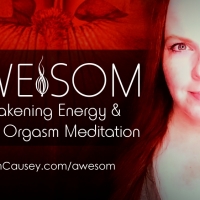 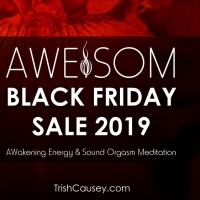 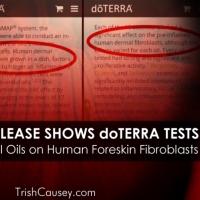 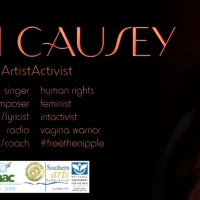 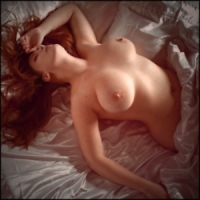